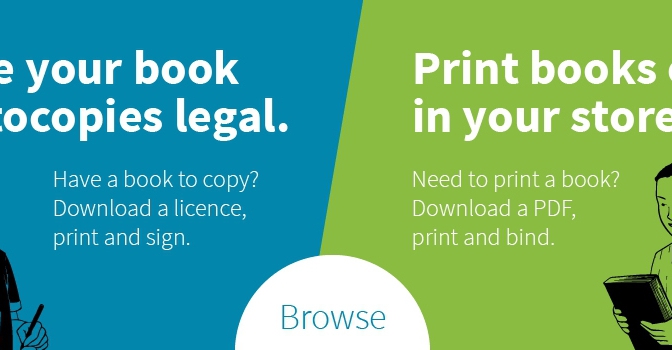 This week, we’re adding a new service to Paperight: we want to make it really fast and easy for anyone to make a legal photocopy of a book.

Why is that important?

Every single day, in thousands of institutions worldwide, teachers and students photocopy books. Ask almost any author or publisher, and they’ll tell you it’s terrible, and that photocopying is illegal and shouldn’t happen.

But still it does. All the time. Why?

Photocopying is easier, faster and cheaper than almost any other way to get a book.

Photocopying is easier, faster and cheaper than almost any other way to get a book. It’s easier, faster and cheaper than buying online, phoning or visiting bookstores, and waiting for delivery. Have you ever tried to buy a copy of a slightly obscure book? Or been the last student to get to the campus bookstore? Then you know that the books you need are often nowhere to be found.

Aren’t ebooks supposed to fix this? If you factor in the overheads of ereading (device, data, electricity, credit card), photocopying can even be easier, faster and cheaper than ebooks – and that’s assuming the book you need is available as an ebook in the first place, and that you’d be happy to study from a screen.

The photocopier may be the single biggest distribution mechanism in the world of books.

The photocopier may be the single biggest distribution mechanism in the world of books. It’s almost certainly the most widespread. Photocopying is not going to go away. It’s a big, old elephant in the room.

Sure. But you have to track down its rights manager and ask for permission first. That might take a few days or weeks. At which point they’ll ask you what you’re going to use the copy for. Then they’ll put you in a pre-defined category, tell you how much to pay and send you a contract to sign. So, basically, it’ll take you an indefinite amount of time and effort to pay an unknown amount of money. That’s if anyone replies to your mail.

Right now, many publishers choose not think about this, because it gives them a headache. If you ask a publisher, many will tell you they already have a plan to make legal photocopying possible: collecting agencies. A collecting agency is an organisation that collects licence fees from people making photocopies. They collect the fees then pay them on to publishers (keeping a reasonable commission). In South Africa, our collecting agency is DALRO.

Firstly, they are a monopoly. Most countries have only one collecting agency for books (there are others for creative works like music), and most of those collaborate under the IFFRO banner. The intention is to make things easy: copiers and publishers can all use the same service. The problem is that this has resulted in a licensing monoculture. There is almost zero diversity in the way that copying licences are sold. As a result, there is almost zero innovation, and no competition.

Second, working with them is full of delays: admin, correspondence, contracts, and a fair amount of legalese that slows you down. Almost nothing is instant – and we live in a world of automation where we expect transactions to be instant. These days, by the time we know we need a book, we’re out of time to find it. We need it now. And so the photocopy room is our friend.

Let’s say you know you’re going to be doing a lot of photocopying. You can have an ongoing agreement with DALRO, where every few months you send them a list of everything you’ve photocopied, and they bill you. That’s called a ‘blanket licence’. It involves a long, complicated legal contract and ongoing billing and reporting requirements. It’s not for the faint-hearted. Only big institutions like large universities are really set up to handle it. And then the university has to have lots of internal rules and processes for making sure everyone uses the system correctly. (Anecdotally, we’ve been told that lecturers at local universities often don’t follow these processes when they prescribe photocopied readings.)

On the other hand, let’s say you just want to make one or two photocopies, and your institution doesn’t have a blanket licence. Maybe you’re a teacher at a primary school, and you want to make twenty quick copies of a novella for your grade sevens. You need a ‘transactional licence’: once-off photocopying permission. For that, you have to contact DALRO each time you want to photocopy, and wait for an email back.

Oh, and there’s this: they’ll only give you permission to copy up to 10 per cent of the book. As DALRO’s website explains, ‘DALRO may not allow the reproduction of whole books, either by a transactional licence or under a blanket licence. It’s unlawful to reproduce a whole book instead of buying it.’  You really need to copy more of the book? Elsewhere on their site, they elaborate: ‘If the book was published by a local publisher, DALRO will contact the publisher and request a licence for the larger portion. If the book was published by a foreign publisher, DALRO cannot process it but puts the licensee in touch with the foreign rights holder.’ That’ll take a while. The 10 per cent restriction is a real pain.

Almost no one knows all this. It’s complicated stuff made worse by its grey areas. Look around online and you’ll struggle to find anything really clear about copyright and photocopying.

For instance, this common FAQ: ‘Am I allowed to photocopy part of a book for my own personal and private use? Copyright [in South Africa] is not infringed by any fair dealing with a literary work for the purposes of the personal or private use of the work by the person making the copy.  What is “fair” in any given situation will always depend on the circumstances of that situation.’

Is it fair that I can’t complete my studies because I can’t find or afford the textbook I’m prescribed?

So who decides about my circumstances? Is it fair that I can’t complete my studies because I can’t find or afford the textbook I’m prescribed? Depends what you mean by ‘fair’. ‘Fair dealing’ is actually a technical legal term whose uncertain meaning differs from country to country, and which laypeople can’t be expected to understand.

Grey areas attract legalese, because no one can really explain in plain language what’s going on. And if something can’t be made plain to laypeople, it will be ignored as if it were never there. If publishers want people to care about copyright, they’ve got to simplify the way people encounter it.

Publishers could grasp the massive opportunity that photocopying represents: a huge book-distribution industry that should be generating revenue from licence fees, but doesn’t because licensing is absurdly complicated and slow.

I’m not talking about students queuing at the local copy shop, they’re not going to start paying licence fees any time soon (there are other ways to tackle that issue). I’m talking about the people who work at institutions: school teachers, college lecturers, librarians, church secretaries, HR managers, government officials. They and their institutions are legally exposed, and don’t want to get into trouble for breaking the law. Many of them would really like to do the right thing.

The only way forward is to make it easy, fast and cheap for them to make a legal photocopy of an entire book. ‘Fast’ as in ‘instant’ by today’s standards. ‘Easy’ as in:

If it can’t be done in five minutes, then it’s not fast and it’s not easy.

That’s what we’ve built: buying a once-off photocopy licence on paperight.com is genuinely fast and easy.

We don’t have many books listed yet: that will be up to publishers. We’re talking to them, and we hope they’ll list their books with us very soon. It’s simple for them to do, and takes almost no effort. (Existing contracts with authors allow reprographic rights deals – the same ones they make with DALRO – and collecting agencies don’t require exclusivity.) It’s also the best way to give out-of-print books a new lease on life, especially at colleges and universities that want to prescribe them.

So is this really just a long pitch for your business? Yes and no. I’d love for everyone to use Paperight for photocopy licensing (and for print-on-demand, our original service).

Competition would raise the bar. And to prove we’re serious, we’ve made the entire paperight.com website engine open-source.

But I’d love even more to have competitors offering the same thing. Competition would raise the bar. And to prove we’re serious, we’ve made the entire paperight.com website engine open-source. That means that if anyone else wants to run their own version of paperight.com under their own brand name, they can go ahead. (Grab the code here. It doesn’t include the books we list, we’re not allowed to share those.) And for anyone who wants to bring Paperight to their country, we’ll split revenue equally, so that we can grow this initiative together.

2 thoughts on “Instant photocopy-licensing: an important step for publishing”